I have prostate cancer and I’ve had PTSD, but in my case, the two aren’t linked, but they can be. Although my cancer diagnosis petrified me, and I get stats angst every time I have a PSA check I’d never considered that cancer might cause PTSD. My brush with post traumatic stress disorder happened more than twenty years ago, long before I’d heard of radiotherapy, hormone therapy, prostatectomy and the other ugly words associated with our condition.

I was fit and healthy, in my forties, and working for ABC News who had a habit of sending us to places where guns, bombs, and bullets were in plentiful supply. If you worked for American TV, particularly in the 90s, then more than likely you’d be chasing the Marines all over the globe. I did time in Sarajevo during the Bosnian conflict, was in Mogadishu when Bush senior sent in the troops and did a stint in DR Congo and Rwanda during the genocide, all places guaranteed to set your nerves on edge. Read on.

In the Autumn of 2017 I was diagnosed with prostate cancer. I thought I'd write about it. View all posts by Jim Preen 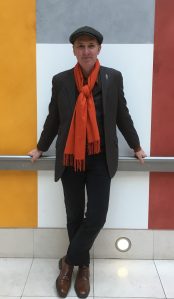 I’m Jim Preen, a Londoner, who was diagnosed with prostate cancer in Autumn 2017. Regular readers of this blog will know I like to keep it light, but inevitably I do touch on subjects that might put you off your breakfast.

This is just my story and my treatment will differ widely from others with prostate cancer. I have no medical training so any thoughts I have or advice contained in this blog should be taken with a large dose of salt. However, if you’re anywhere near 50 and the proud owner of a prostate, go get it checked. A moment’s mild indignity could save your life.